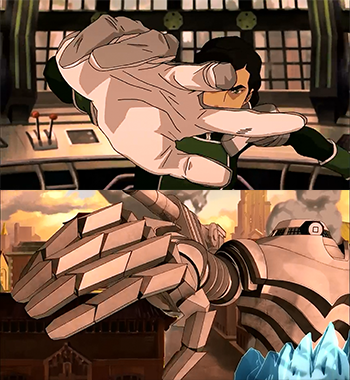 This trope is easy for metalbenders.
"Fresh and ready for battle, I released the first steam valve and locked in the marionette-like motion activators.
Every movement of my body caused the Golem to react in like manner. I stomped across the battlefield, and struck the rock giant in the chest.
It grabbed me. I half expected the whole contraption to explode, but the golem stood solid.
I pushed back, grappling hand to hand with the creature! Imagine! Me, a simple engineer, locked in melee with a legend!"
— From the description of the Golem unit, Age of Wonders 3
Advertisement:

A type of control system for Humongous Mecha, where the robot reads your movement like motion captures. This entails the user doing a movement, like miming walking forward or throwing a punch in the cockpit, and then this action is mirrored by the Mecha doing the same thing. This control interface is often used as a justification of the humanoid shape because it has more natural and graceful movement than one without the humanoid shape using the same system. Doing this justifies the mecha as an Impossibly Graceful Giant.

This usually comes in two flavours, free control cockpit room inside the mecha (or remote-controlled by same) or a large apparatus that the pilot fits into. The first type of control have the pilot wearing some kind of motion capture suit, or the room itself has a certain motion capture technology, and the mecha simply mimics it. The second type usually have a mechanized suit, or part of one, inside the cockpit, which is used to capture the motion and hold the pilot in place. The limitation, especially with the first type, is that the pilot has to be physically capable of performing any moves he wants the mecha to mimic.

Both types, however, usually need some kind of secondary input device (voice activation, thought control, computer-assisted action module, traditional keyboard, etc.) to compensate for anything non-human in the mecha, like propulsion, integrated weapons, etc. This is also needed to tell the mecha when to stop following the pilot's movements when he's ready to open the cockpit hatch and get out. Both variants can be done through remote control technology.

Powered Armor or Mini-Mecha may also use the second type to read the operator movement.

Coop switches to Megas' manual mode to copy his movements as he takes on The Glorft.

Coop switches to Megas' manual mode to copy his movements as he takes on The Glorft.