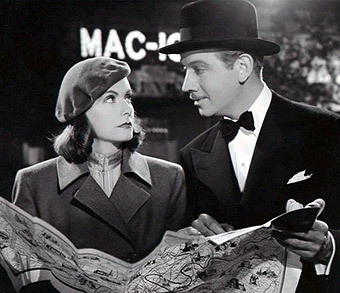 "A Russian! I love Russians! Comrade, I've been fascinated by your five-year plan for the last fifteen years."
"The last mass trials have been a great success. There are going to be fewer but better Russians."
— Ninotchka
Advertisement:

Three bungling Soviet diplomats aim to sell some Romanov diamonds to a Parisian jeweller to raise funds for the Soviet Union. Nina Ivanovna Yakushova, nicknamed "Ninotchka" (Garbo), an Ice Queen diplomat, is sent over to help them after they make a mess of it. In Paris, she meets and falls in love with Parisian boulevardier and aristocrat Leon d'Algout (Douglas). In this she finds herself rivaled by the diamonds' original owner, the Grand Duchess Swana (Ina Claire), who wishes to retrieve both the jewels and Leon's affections. Swana manipulates Ninotchka into abandoning Leon in order to keep the jewels for Russia. Leon, however, does not accept the situation...

Bela Lugosi has a small part as Soviet commissar Razinin. It's one of the few non-horror films he ever appeared in, but he's still pretty creepy.

The story was later remade as the musical Silk Stockings, with music by Cole Porter, which was itself adapted into a 1957 MGM film with Fred Astaire and Cyd Charisse in the Douglas and Garbo parts, respectively.