The Film of the Play 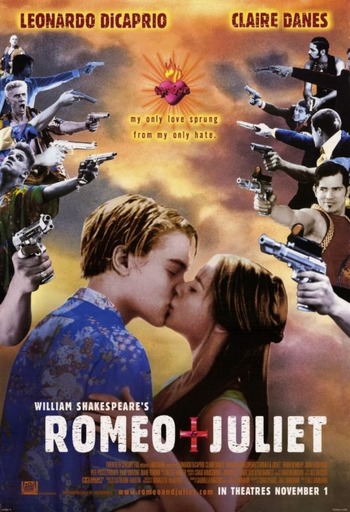 A film which is an adaptation of a theatre play. Screen-to-Stage Adaptation is the inversion.

Yet, there are some drawbacks: in theatre plays, the dialogue is essential, too essential for a movie which will often seem too verbose. Theatre play adaptations also tend to be very static, because, in a play, the action happens in a very limited number of places (for obvious reasons). Consequently, these films are more likely to be a Bottle Episode or make use of Minimalism, Minimalist Cast and The Oner than other movies because of the technical limitations of stage plays.

Running time is the most frequent difference between a play and its movie. While not a hard limit, it is rare to see a film over 3 hours. Many plays exceed this (unabridged Hamlet can run for over 4 hours) and their film adaptations are usually cut to fit into this length. Even if the play clocks in at 3 hours or so cuts may be made to make room for establishing shots if the elimination of transitions doesn't create enough time.

Unlike books and other media adaptations, plays often get made into films multiple times. This is perhaps due to their nature as blueprints for storytelling rather than realized works on their own.

In order to get around the common drawbacks of adaptations of theatre plays (verbosity, lack of action...), there is another approach. These adaptations will use the plot of a theatre play, but will change the setting and completely rewrite the dialogue. The works of William Shakespeare are a frequent target of this kind of adaptation. Alternatively, an adaptation may retain the plot and general setting, but expand the action, with events described in dialogue in the play due to the limitations of what can be seen on stage directly depicted in the film.

Popular stage musicals are also frequently adapted into films. Almost all movie musicals made after the studio era are examples of this.

In the lists below "Production" means a the play was performed without significant change to its dialog (usually just abridgement), an "Adaptation" means the play's basic plot is present, but the dialog has been replaced.

As befits his position as one of the most important authors of the English language and arguably the world, Shakespeare's plays were among the first to find their way to film, with some being adapted for silent film. There's a lot of Kenneth Branagh productions listed here as he seems intent on committing all of Shakespeare's plays to film. Unless otherwise noted, productions are named after their directors in the list below:

Adaptations and productions of other theatre plays:

Adaptations and productions of stage musicals: