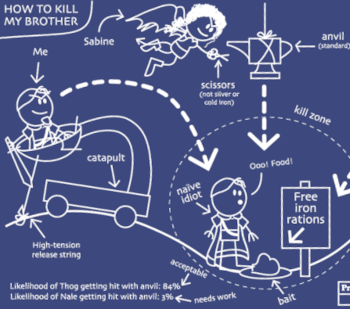 "Kim, PeeJee is our friend. And if someone is worth caring about, they're worth the effort of a long, convoluted solution that doesn't actually address the problem. Now, I need four cellphones, ten balls of yarn and two nights worth of cigarettes. I've got a miracle to perform."
— Aubrey Chorde, Something*Positive
Advertisement:

A Sitcom plot where one or more characters tries to achieve some end — usually extricating themselves from trouble — by some kind of elaborate, unlikely plan, something like "You distract them by faking a heart attack while I sneak into the bedroom and switch the real ring for the fake one, and remember this whole time they think I'm you and you're me...". Often the plan isn't fully exposed and only Noodle Implements are given.

Sometimes they pull it off by the skin of their teeth. More often than not it all comes crashing down right at the end. Sometimes another character launches a Counter Zany, which may escalate into a Zany Scheme Chicken. This trope can sometimes be similar to a small-scale Gambit Roulette and the source of many a Full-Name Ultimatum.

This trope, being over-used, is often subverted by having the character to whom the zany scheme is proposed simply shoot the whole thing down as ridiculous, and switch to another plot. An even further subversion occurs when the sensible plot then fails while the zany one succeeds.

Since the Zany Scheme is usually spelled out to the audience in advance, it is subject to the Unspoken Plan Guarantee.