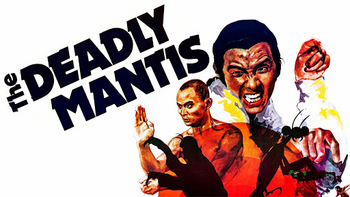 So... where's the giant insect monster?

Also known as The Deadly Mantis, this is one of the solo-efforts historical period dramas starring David Chiang in the twilight years of his career in Shaw Brothers, and is often seen as one of his best efforts before Chiang's eventual departure from the studios following Ti Lung, Danny Lee and Jimmy Wang Yu.

It's the end of the Qing Dynasty, and Wei Fung (David Chiang), a scholar, teacher and martial artist, is sent by his father to investigate the Tien clan, whose leader, Master Tien is suspected to be working with rebels aiming to overthrow the Imperial Court. Infiltrating the clan by posing as the tutor of Tien's granddaughter, Chi-chi, the mission becomes complicated when Wei Fung falls for Chi-chi while trying to investigate the Tien family. And when Master Tien finds out about the truth, things are not looking well for Wei Fung.

Do NOT confuse this with the 1956 monster movie of the same name. No giant insect monsters here, this is just a martial arts movie with a praying mantis theme, that's all...