Film / It Should Happen to You 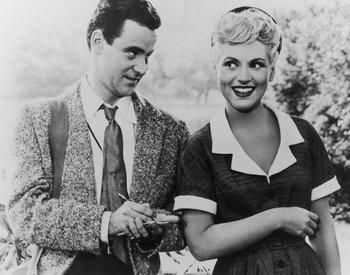 Gladys Glover (Judy Holliday) is tired of being a nobody when she specifically came to NYC to be a somebody, and the fact that she’s been fired from her modeling job makes matters even worse.

Wandering around Central Park, she meets documentary filmmaker Pete Sheppard (Jack Lemmon), who falls for her instantly. Gladys, on the other hand, is inspired by Pete's twist on a famous saying (“where there's a way, there's a will”), and decides to finally get out of her rut.

On Columbus Circle, she manages to rent a billboard which plainly displays her name. Complications arise when ad executives need it for an Adams soap campaign, and through smart bargaining, Gladys makes a deal to change that one solitary billboard into six, all across New York City. This, in turn, makes her a local celebrity with everyone wondering about Gladys Glover.

Things blow up significantly for Gladys: she's getting TV spots, radio spots, her own Adams soap campaign, and being romanced by Evan Adams III (Peter Lawford), the heir to the soap empire. Meanwhile, Pete isn’t happy with any of Gladys' schemes to become a household name, or the fact that he doesn’t have a fair chance of getting Gladys with a millionaire playboy lurking around.

Released in 1954 and directed by Romantic Comedy genius George Cukor, It Should Happen to You stars Judy Holliday playing her magnificent dumb blonde role and Jack Lemmon in his feature-film debut.

Not to be confused with It Could Happen to You.