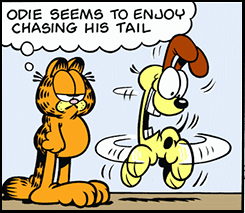 Mr. Burns: Dogs are idiots! Think about it, Smithers, if I came into your room, and started sniffing at your crotch and slobbering all over your face... what would you say?
Smithers: ...Uh... if YOU did it, sir?
Mr. Burns: Exactly! You'd be fit to be tied.
— The Simpsons
Advertisement:

Cats Are Mean, right? Dogs, on the other hand, are always obedient and loyal. Unfortunately in the modern age, "Loyalty" has been diluted and warped into "stupidity," and these days, unless dogs are the main characters in a given story, they are usually portrayed as very simple-minded creatures who can't really function outside of instinct and impulse. It also helps that several breeds of dog have an incredible talent for looking like wide-eyed, buffoonish, empty-headed dopes and/or slobbering Kindhearted Simpletons at best. While this isn't necessarily a bad thing, it usually serves to make the dog in question out to be incredibly stupid, especially if some other animal is nearby acting much more sensible, according to human standards of behavior that is.

Amongst an ensemble of Talking Animals, the dog is often the dumbest, and rarely smarter than the timid mouse or the hyperactive squirrel, in real life way less intelligent than dogs.

Of course, as any dog owner can attest, dogs often do things that seem quite dumb (not to mention annoying to humans): loudly barking at nonexistent threats, trying to eat everything they find on the sidewalk, and recklessly chasing after squirrels, skunks, and porcupines. And cars. Cats, though still prone to their own brand of animal idiocy, are much more naturally discreet in fiction or not, hence the common portrayal of a quiet, cautious, and aloof cat and a clumsy, foolish, and boisterous dog.

Unsurprisingly, certain dogs tend to be lazy when they are dumb, often spending times doing nothing aside sleeping through a whole day, and they will always ignore the owner's commands during these time periods.

This trope is somewhat based on a grain of truth, not that all dogs lack intelligence but that they are unable to function without humans (although this doesn't apply to all dogs as there are many breeds that are very much independent and can, in fact, function well without humans). Dogs have undergone thousands of years of selective breeding to rely on humans for most of their needs and to obey their commands. Dogs have even evolved to mimic human facial expressions and to digest grains because that's what their humans would offer. Cats domesticated themselves and will leave a neglectful owner and, like many other domesticated animals, can revert to a feral state which allows them to become self-reliant.

This isn't the case with dogs as they cannot form self-sustaining populations on their own and will even stay with owners who abuse them, which can make a pet dog seem like a mindless Sycophantic Servant (this isn't always true, though, considering dogs are capable of forming their own packs and even being self-reliant; this can be seen in many countries where dogs aren't kept as pets and are left roaming the streets and adapting to it. And many dogs will attempt to run away from abusive owners when given the chance or, if cornered, will bite or fight back to protect themselves when they've had enough). There has been evidence that due to their dependence on humans, dogs have learned to use humans as tools for their own benefit by manipulating them into giving food or solving problems as they have forgotten how to do so themselves... or perhaps as a way for humans to be their unsuspecting slaves.

This trope was becoming an Dead Horse Trope due to how it was overused ever since the concept of a dumb dog was invented and has become an Forgotten Trope in the 21st century.

Dogs doing what comes naturally when nature calls leads to Urine Trouble. Wild canines are often the opposite of dumb, including the Noble Wolf, Those Wily Coyotes, and Cunning Like a Fox.

In non-Western works (especially East Asian works), dogs are rarely portrayed as dumb and are more often portrayed as intelligent and savage animals. Therefore, this trope is almost never played straight due to cultural reasons.

If the dogs are portrayed as evil instead of dumb, it is Mister Muffykins or Beware of Vicious Dog.

Compare and Contrast to Cats Are Lazy (if an ordinary cat is dumb) and/or Buffoonish Tomcat (if they are the exceptionally clumsy, goofy, clownish, ludicrous and cartoony counterpart to the lazy counterparts), and other creatures/etc that had been stereotyped or depicted with lacking in intelligence such as Dumb Dinos, Doofy Dodo, Moose Are Idiots, and Frazetta Man.

Puppycorn takes a while to realize being the younger brother of a princess means he's a prince.

Puppycorn takes a while to realize being the younger brother of a princess means he's a prince.