Literature / Please Don't Tell My Parents I Have a Nemesis 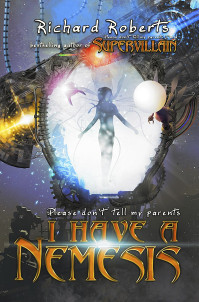 The sequel to Please Don't Tell My Parents I've Got Henchmen by Richard Roberts, released on May 27th, 2017.

Penny's parents, eased into the idea of her superpowers being fully operational, have begun training her as a superhero. Meanwhile, she's determining a way to get rid of her persona as Bad Penny. Claire and Ray have their own plans, but pledge to support Penny in any way they can, even if they're not really ready to be superheroes themselves. When former associates from outer space show up, a mysterious soul-sucking artifact is stolen, and a minion-making villain from the prequels shows up, Penny comes up with a cunning plan to prove herself a hero once and for all, and establish herself as a hero.

The story ends on a major cliffhanger, which will likely be reflected in the tropes listed below, so be warned.