Blog / Things Mr. Welch Is No Longer Allowed to Do in an RPG 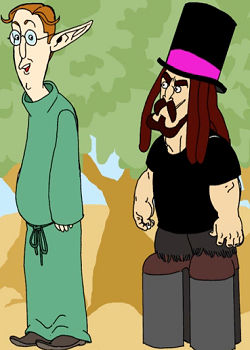 Dwarf Bard Rjägnjär Hjëllstjürm #629. Just because they are all into rock, metal and axes, dwarves are not all headbangers.
"If given a choice of options, always take the crazy one. Nobody ever plans for crazy."
— Mr. Welch answering a question about role playing at Con-Jour II
Advertisement:

Things Mr. Welch Is Not Allowed to Do in an RPG is Exactly What It Says on the Tin — a list of things Mr. Welch, poster boy for The Loonie, has been banned from doing in Tabletop Games. It is long (2,525 items at last count), imaginative, full of Defied Tropes (as in the Game Masters doing the defying to him), and often really funny.

The original list of 25 debuted in 2005 on a Livejournal entry by TheGlen, but has since been updated every few weeks in blocks of 25. According to the author, the list contains jokes related to over fifty different roleplaying games, the majority of which regard the various editions of Dungeons & Dragons. Other games that appear frequently include Star Wars, Deadlands, Cyberpunk 2020, 7th Sea, Werewolf: The Apocalypse, Æon Trinity, Iron Claw, Iron Kingdoms, Robotech, and GURPS.

Compare Skippy's List, "Things Runs-Like-Hell is not allowed to do in the Garou Nation" (which is Werewolf: The Apocalypse specific). It turns out Skippy and Mr. Welch knew each other in real life but didn't know that each of them had written these lists they were both fans of until they were invited to attend a convention together.

Compare and contrast the Evil Overlord List, which is more about becoming Genre Savvy. Another, earlier list by Mr. Welch can be found here