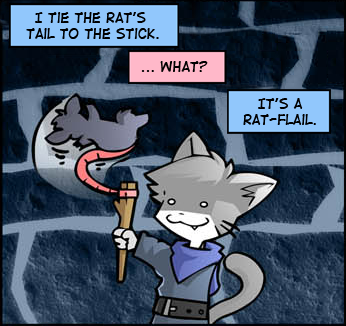 "Cannot base characters off The Who's drummer Keith Moon."
—Things Mr. Welch Is No Longer Allowed to Do in an RPG #1

(it just gets crazier from there)
Advertisement:

The Loonie is the Tabletop RPG player who plays mostly for the fun of doing silly things within the game. They typically optimize their character for comedy rather than combat and are more likely to pick a "goofy" character or unconventional races purely for the novelty (such as awakened animals, Kender, Malkavians, and so forth). Their abilities will be mainly based on their potential for wacky antics (so rogues and mages with a lot of illusion and enchantment spells are popular).

This player loves poking at the setting to provoke strange responses and going Off the Rails in outrageous ways. They'll use their tower shields as makeshift snowboards, and think shouting "Look Behind You" then running away is enough to elude a hostile greater demon. They'll then try to talk the Game Master into letting them attempt a trip attack on aforementioned greater demon using a Banana Peel. They'll crack jokes and mock the NPCs at every opportunity, and futz with every magic item thrown their way.

The Loonie can be a fun player to have around; a little comic relief can help to ease the tension of a long campaign. However, sometimes their constant jokes can wear thin, and they can quickly cross the line from amusing to annoying. They can be especially grating to extreme Roleplayers, Munchkins, and other people who take the game way too seriously. It probably doesn't help that their lack of humor only encourages the Loonie to annoy them more. Naturally, this archetype is most often welcome in free-for-all sessions, where there aren't any rules to begin with; however, this might not be as fun to some Loonies, who play because of the thrill that comes from breaking the rules.

Like the other archetypes, the Loonie comes in variations. Ones that know how to be eccentric and effective are Bunny Ears Lawyers of a sort, especially when crossed with a Munchkin. This variety will actually act out all the weird flaws and quirks they took to get those plusses, and take their humor as seriously as their gameplay, potentially crossing into Lethal Joke Character territory. (One entry from the list providing the quote forbids Mr. Welch's characters from owning a gun which can kill a target in an adjacent county, for example.) The Loonie's favourite Character Alignment is Chaotic Neutral (because it's the perfect excuse for doing anything), but to their detractors it will feel more like Chaotic Stupid: it all depends on how good a comedian they are. Expect liberal use of Rule of Funny, Rule of Fun, and Rule of Cool.

When successfully crossed with a Roleplayer, the Loonie will go to great lengths to justify outrageous acts without breaking character — clerics of trickster deities, characters with insanity flaws, paladins and knights, and classes/races that imply a lack of social grace, nonstandard equipment, and/or a lack of proper training are all popular character choices for this variety of Loonie. This breed of Loonie tends to be given much more tolerance by normal Roleplayers: the comedic potential of an orc wizard or a monk with a drinking problem requires little to no breaking of immersion when roleplayed well, and they're as likely to come up with ideas Crazy Enough to Work as they are ones that are just crazy.

The rare cases of Loonie/Real Man hybrids result in a player who seeks to make the parts between combat engagements more interesting to themselves by playing the clown. Done well, it keeps them engaged and contributing to the session; done poorly, it becomes a protest against "the boring parts" and a tool for turning any encounter into a combat engagement, much to the delight of the Munchkin and the horror of the GM and the Roleplayer.

Cases of exceptional competence and reasonable restraint aside, Loonie/Munchkin hybrids are just annoying. Any Loonie may have that distressing tendency to Chaotic Stupid character behavior; this type guarantees it.

Suffice to say, the wise Game Master will be very careful about letting the Loonie get their hands on any sort of large explosive device. Hilarity will ensue (as well as a Total Party Kill, most of the time).

A Player Archetypes subtrope, along with The Real Man, The Role Player, and the Munchkin.

See also Things You Are Not Allowed to Do.

Has nothing to do with the Canadian one-dollar coin.