Tabletop Game / All Flesh Must Be Eaten 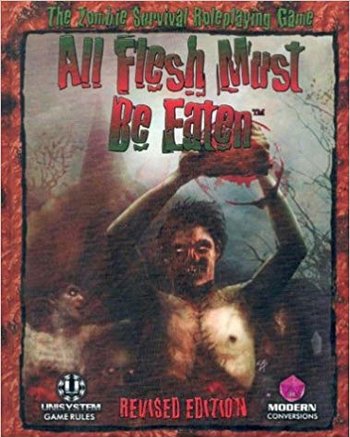 All Flesh Must Be Eaten is one of the most popular and well known gamelines produced by Eden Studios for its Unisystem roleplaying game, even compared to its RPGs inspired by Buffy the Vampire Slayer, Angel and Army of Darkness.

All Flesh Must Be Eaten, typically abbreviated as "AFMBE", is a Survival Horror Tabletop Role-Playing Game based around the concept of a Zombie Apocalypse. Extremely modular in both character design, creature design and setting design, this has contributed to its surprising levels of popularity: not only did the corebook eventually receive a "Revised" edition with rules for converting from Unisystem to d20 Modern, it spawned two books containing nothing but premade character archetypes, three books of collected fiction, a world of pre-made settings, and an array of other sourcebooks as well. These include mixing zombies with Pulp, Kung-Fu and Gun Fu action, Westerns, Science Fiction, pirates, conventional fantasy and wrestling.

While All Flesh Must Be Eaten prides itself on its flexibility for budding Game Masters (called "Zombie Masters" in the game's lingo) to create their own world, the corebook naturally comes with an extensive list of deadworlds (settings) for a game to be set in. Each of the subsequent sourcebooks also include several deadworlds as well, to better showcase their rules.

open/close all folders
Corebook
Advertisement:
Fistful o' Zombies
Enter The Zombie
Pulp Zombies
All Tomorrow's Zombies
Worlds of the Dead
Zombie Smackdown
Arrrgh! Thar Be Zombies!
One of the Living