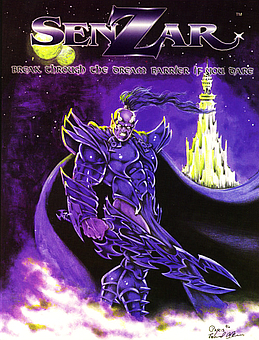 Break through the dream barrier if you dare.
Advertisement:

SenZar is a very high-powered and Heavy Metal influenced tabletop RPG which first appeared in the mid-1990s, during the 2nd Edition AD&D era. It immediately met with controversy due to a botched Usenet advertising effort by the developers. (Nowadays, however, games like F.A.T.A.L. and Wraeththu have eclipsed SenZar as the "worst game EVER".)

Aside from the Usenet incident, SenZar's main claim to fame is its wholehearted embrace of shameless power-gaming. From the first page of the main rulebook, player are openly encouraged to make their characters as ludicrously powerful as the rules will allow, kick ass and hoard loot at every possible opportunity, and ultimately ascend to godhood.

The actual rule system uses d20 rolls over a target number (with the roll increasing to d100 for stats of 20+, which are typically reserved for gods). Characters have a race, a class, and a level like in most D&D clones, but unlike most D&D clones, the power of spells reaches city-leveling heights (even before godhood), warrior types can be lovingly fleshed out with enough martial arts powers to give most superheroes a run for their money, dozens of exotic materials are available to artifice super-powerful equipment with, players get 'Fate Points' allowing them to edit poor die rolls, and even a first-level character can start with magic items that wouldn't be permitted as major artifacts in a more sane setting.

Naturally, the artwork is also high in cheesecake.

The setting itself is a fantasy world with hints of a Space Opera background. The planet SenZar was settled in ancient times as a slave world by the intergalactic Death Horde, only for the Dragon — the Life Stream of SenZar — to inspire the slaves to overthrow their Death Horde masters and begin an unending Cosmic Chess Game between good and evil. Playable races include typical (but 'metalled up') fantasy fare like Starin and Khazak, as well as various Beast Men, Plant People, demonic humanoids, a Captain Ersatz race or two, and a host of others.