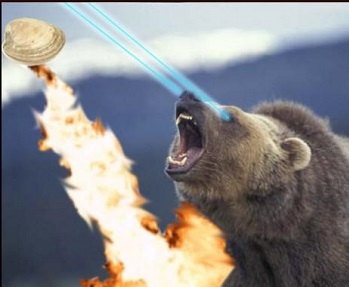 No, really.
World of Synnibarr is a tabletop role-playing game, the brainchild of one Raven c. s. McCracken. For most of the 90's, the game was considered by many gamers to be the worst role-playing game ever, but nowadays it has ceded that title to F.A.T.A.L., which is awful for altogether worse reasons (Synnibarr, for all its absurdity, at least doesn't pander to unrepentant misogynists).
Advertisement:

The setting is an intense fever dream of science fiction, dark fantasy, comic book superheroism, and other over-the-top elements, with wars lasting for tens of thousands of years and a huge assortment of acid trip monsters (only one example of which are 72-headed hydras), all of whom are living inside a hollowed-out planet Mars that has been converted into a colossal Worldship.

Online reviews of it can be found here