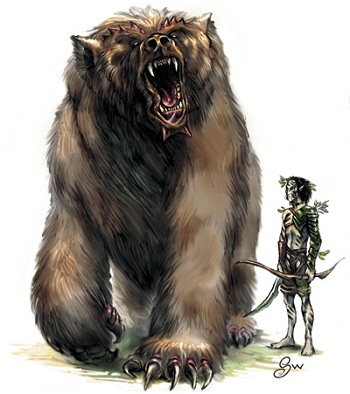 And you thought bears were bad news before you met one the size of an African elephant.
"You know what a dire X is, right? They're like X, only dire."
— South Park: The Stick of Truth, describing the wildlife of...Canada
Advertisement:

The dire animal: a larger, often more "prehistoric"-looking version of a normal animal. It's popular in fantasy works. After all, watching your hero fight a normal-sized rat is hardly impressive, but make it the size of a small dog, now, that is impressive. A wolf might be threatening, but a sabre-toothed wolf the size of a bear... now, that's even more impressive.

Note that dire wolves did actually exist in real life, though they were only slightly larger than "normal" wolves, and disappointingly, recent DNA evidence has suggested that they were not actually in the genus Canis, nor were they closely related to gray wolves.note  Their skeletal structure is very similar to a gray wolf's, though, which is what caused the assumption. It's a result of convergent evolution. In addition, during the Cenozoic era there were many relatives of modern mammals such as rhinos, sloths, and hyenas that were far larger than their extant cousins and could easily be seen as further inspiration to this trope.

Dire Animals have become a staple of fantasy works, often serving as early game enemies (with Dire Rats ideal for a Rat Stomp). Dire version of more impressive animals can still pose a challenge later in the story (Dire Bears the size of elephants, Dire Tyrannosaurus rex) but most often these form one of the earliest challenge heroes must face.

May be the subject of Giant Animal Worship.

Dire Animals may fit into various related tropes depending on what animals they are:

Related to Whateversaurus. Subtrope of Bigger Is Better. Compare Animals Not to Scale, Attack of the 50-Foot Whatever when these beasts turn gigantic. Prehistoric variants often overlap with Prehistoric Monster (and, as mentioned above, many prehistoric animals were giant relatives of modern animals). Contrast Fun Size.