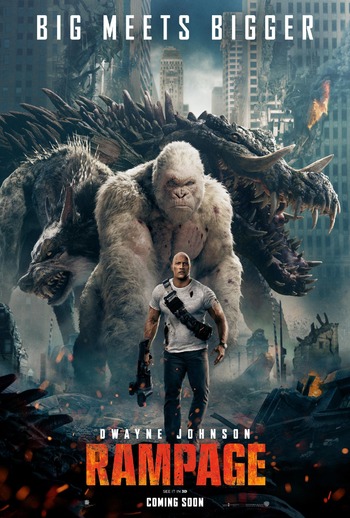 "Despite all my rage, I am still just a rat in a cage."
"Hell of a day, huh? Science experiments fallin' from the sky."
—Agent Russell
Advertisement:

The plot concerns Davis Okoye (Dwayne Johnson), a primatologist and the head of a Rwanda-based anti-poaching unit noted for his close companionship with George, an albino silverback gorilla he raised from a young age. One night a strange device falls from the sky into George's enclosure, and by the next day the gorilla begins experiencing drastic increases in both size and aggression. Agent Russell (Jeffrey Dean Morgan), a member of a nebulous government agency, arrives and takes George into custody, but the now-giant ape crashes the transport jet, as concurrently a grey wolf dubbed Ralph from an animal preserve and an American crocodile dubbed Lizzie from the Everglades undergo similar mutations and the three beasts embark on a cross-country rampage. Okoye teams up with rogue geneticist Dr. Kate Caldwell (Naomie Harris) to find a cure to the mysterious mutagen, not only to end the three monsters' rampage but to save George from being killed by the military.

Plans for a film adaptation of the video-game series began in 2009, following Warner Bros' purchase of Midway Games's franchises. In 2011, New Line Cinema announced they would be developing the movie with John Rickard to direct, although he eventually left when the film became stuck in Development Hell. In 2015, Dwayne Johnson signed on as the film's lead and Brad Peyton was attached as both the director and a producer.

Not to be confused with the other works called Rampage.

Of course Rampage has examples of tropes: