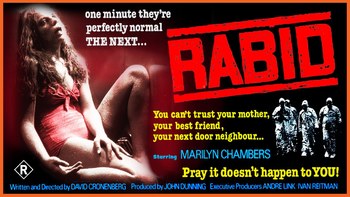 Young Rose (adult film star Marilyn Chambers) is severely injured in a freak highway accident in the countryside, necessitating an experimental grafting procedure to save her life. Rose appears to make a full recovery, but soon develops an unusual, phallic stinger on her armpit that feeds off of human blood, and infects those it touches with a highly potent rabies strain that renders the infected an insane, zombie-like creature. Rose, unbeknownst of her own condition, begins spreading the epidemic across the countryside and into a nearby urban centre as the situation spirals further and further out of control.

Rabid (1977) is director David Cronenberg's second feature film after the controversy and success of Shivers. It was his first film to receive a wide release in the United States, being co-produced by Roger Corman's New World Pictures

, and Cronenberg's second collaboration with producer Ivan Reitman. The cast is a venerable Who's-Who of Canadian character actors, including cameos by future Queer as Folk and Call Me Fitz star Peter MacNeill and Empire Records director Allan Moyle.

This film was given a remake in 2019, starring Laura Vandervoort as Rose.

The 1977 film contains examples of:

The 2019 remake contains examples of: