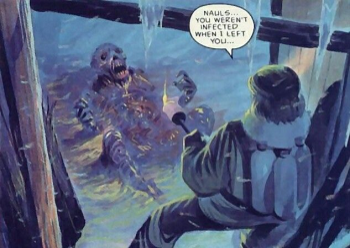 "Well Brian, I'm sorry that Jess died during the commercial break, but it was a very nice funeral."
— Lois Griffin, Family Guy

Killed Offscreen is the term used to describe the occurrence of a character dying outside of the audience's view. The character's corpse may be seen later, or confirmation may be given by another character, who witnessed the death/found the corpse.

See also The Character Died with Him. Bus Crash is when this happens to a character who'd previously been written out of the series in a non-lethal manner. When a character dies out of the view of another character due to a brief distraction, that's Distracted from Death.

Compare Gory Discretion Shot and Sound-Only Death. As this kind of death tends to not be a very dignified exit for a character, seeing how it is in all regards a rather anti-climatic way to die and often (though not always) carries with it the implication that that said death was not important enough to be shown on-screen, there tends to be a lot of overlap with Dropped a Bridge on Him. Can also overlap with Sudden Sequel Death Syndrome when the death takes place between works.

As a Death Trope, beware of spoilers!