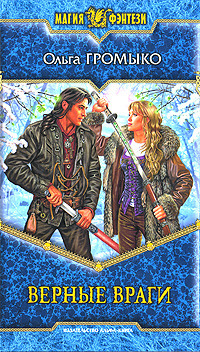 She-wolf Shelena and her so-called enemy, wizard Veres.
Shelena: Just great! I found myself in a fascinating company! A banished wizard who can't conjure anything without fainting immediately, a dragon who runs away from overgrown wolves, an adolescent with consumption and a child!
Gloom: And a werewolf with a nasty character.
Veres: It's not your usual werewolf... She's a woman. And there's no elixir that'd help you with that.
Advertisement:

Loyal Enemies ("Верные враги", "Vernye vragi") is a fantasy novel by Belarusian writer Olga Gromyko. It is set in Beloria, the same universe as her previous books.

Shelena is a werewolf. She moves from place to place, never staying for long, afraid of getting lynched should her identity ever be discovered. Currently, she's working as a herbalist's assistant in a small town on the border of Beloria. Her painstakingly-built daily routine is ruined, however, when she takes home a half-dead sorcerer who was left to die in a roadside ditch. The man is none other than Veres, a monster hunter who once tried to kill her, but Shelena wishes to settle the matter once and for all in an honorable manner, which means she first has to wait for him to heal.

Between Veres' distrust for her and his student Rest's hilarious antics as the boy tries to "save" his master from the "wild beast", something bad starts to happen in town, and whoever's behind it apparently sees it fit to include Shelena and Veres in their plans. They decide not to play by the rules, though. Accompanied by Rest and Veres' dragon-buddy Gloom, who wants to eat Shelena once he wins the game of cards with her, they set out to discover what's going on. But as it turns out, they are in way over their heads...

The novella A Trap for a Necromancer from the collection The Chronicles of Beloria also features the same characters. Here, Shelena and Veres get roped into hunting down a renegade necromancer in Beloria's capital city of Starmin.