Literature / The Master and Margarita 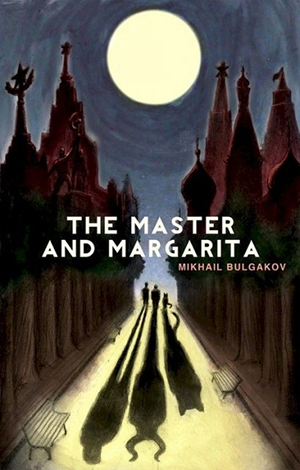 "I am part of that force which wills forever evil and works forever good."
— Goethe's Faust, as quoted in the novel's epigraph
Advertisement:

This novel was written by Mikhail Bulgakov in 1928-1940, but only published in the Soviet Union in 1966-1967 in a severely Bowdlerised edition. It is notable for not having a single definite main character around whom most of the plot revolves, although the Anti-Villain may qualify.

The main plot nominally follows Satan, who arrives with his Ragtag Bunch of Misfits in 1930s Moscow under the guise of a foreign Professor of the occult, Woland. His true intent is to host a periodic carnival of the dead. Much of the humor and social satire in the novel is derived from Woland and his henchmen exposing the numb-skulled bureaucratic officiousness of Soviet society. He is not truly evil, but some of his pranks prove humiliating to the faux aristocracy of the Soviet Union.

On their way, they cross the path of MASSOLIT, a bureaucratic association of talentless writers pumping out trash mass-production literature extolling social order — in fact, the book begins with Woland's encounter with publisher Mikhail Berlioz and poet Ivan Bezdomnynote Bezdomny is a pseudonym meaning Homeless, a parody of the "socially minded" pseudonyms popular among the early Soviet authors in general, and poet Yakov Ovcharenko, alias Ivan Pribludny (The Stray), in particular. Woland is curious about the Soviet denial of religion and the supernatural and mocks Berlioz' atheism, giving him a warning which he chooses to dismiss. Shortly after, Mikhail dies in a freak accident and Ivan is commissioned into a madhouse due to realizing the truth about Woland and his involvement. Ivan then meets the titular Master, a nameless novelist whose novel about Pontius Pilate did not pass Soviet censorship, prompting him to burn it and leaving him emotionally crippled. Meanwhile, the Master's former love Margarita Nikolayevna, seeking reunion with him, agrees to act as the queen of Woland's upcoming carnival.

The main plot is interleaved with chapters from the Master's novel, telling the story of Pontius Pilate and his encounters with the wandering philosopher Yeshua Ha-Nozri (Jesus of Nazareth), his only disciple Matthew Levi and the betrayer Judas of Karioth. This storyline is united with the main one and resolved at once at the end, when the Master and Margarita grant Pilate his long-awaited spiritual union with Yeshua, whom he once doomed to crucifixion.

Among Russian critics, this novel is one of the most favorite targets of the Everyone Is Jesus in Purgatory syndrome, although a story featuring both Jesus and Satan as characters arguably had it coming. It has also seen a lot of adaptations, two of them in Russia (after the fall of the Soviet Union) and plenty abroad. The 2005 miniseries by Vladimir Bortko (famous for a massively popular 1988 adaptation of Bulgakov's earlier "Heart of a Dog") was perhaps the most faithful to the original text, although it was somewhat of a disappointment on the technical side, particularly in regards to questionable casting choices.

The Bortko TV series provides most of the above, plus this :