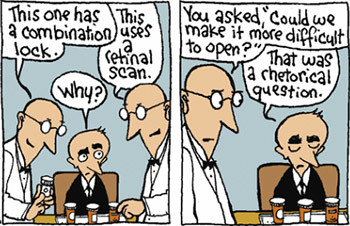 "Will no one rid me of this turbulent priest?"
— King Henry II, of Archbishop Thomas Becket. note Sadly for Becket, the people who overheard it weren't familiar with rhetorical questions, and Becket was murdered on the altar of Canterbury Cathedral. Historians suspect Henry never forgave himself.
Advertisement:

People routinely say things they do not mean. Swearing to kill someone or wishing some horrible fate would befall them is usually a harmless way of venting steam.

Sometimes a character may think he is speaking to himself, but unbeknownst to him someone is listening, and ready to act on his wishes. Alternatively, a character in company may speak in hyperbole, thinking no sane person would actually do it. He could be fatally wrong on that point. Or there might be someone insane around. Either way, their careless statement has Gone Horribly Right.

Subtrope of Be Careful What You Wish For and Poor Communication Kills. Remember that asking for things you do not want to happen is Tempting Fate. See Literal Genie and Jackass Genie for deliberately misinterpreted requests. See I Was Just Joking for cases where someone else takes a hyperbolic statement seriously but doesn't act on it (usually because the speaker explains that he didn't really mean what he'd said).

Particularly moral characters may say It's All My Fault after the deed is done. Compare I Wished You Were Dead. May be carried out by a Poisonous Friend or Overzealous Underling. Blunt Metaphors Trauma or being Sarcasm-Blind might lead to this. See also Irrevocable Order. Not to be confused with Rhetorical Question Blunder.

Unaware that Stan has tricked him into taking the place of a deceased dictator, Roger is completely unaware that his "orders" are being carried out when he makes disparaging remarks about the palace staff.

Alternative Title(s): That Wasnt An Order

Unaware that Stan has tricked him into taking the place of a deceased dictator, Roger is completely unaware that his "orders" are being carried out when he makes disparaging remarks about the palace staff.