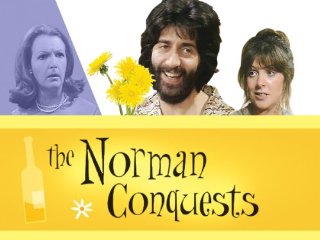 The Norman Conquests is a cycle of three plays written by Alan Ayckbourn and first performed in 1973. All three plays take place in the same house, on the same July weekend, but in different rooms. Each play stands alone, and they can be watched in any order; however, some of the scenes overlap, and on several occasions a character's exit from one play corresponds with an entrance in another.

The story focuses on the intertwining lives of siblings Annie, Reg, and Ruth; Reg's wife Sarah; Ruth's husband Norman; and local vet Tom, who is theoretically courting Annie (emphasis on "theoretically"). All three plays start on Saturday evening with Reg and Sarah arriving to take over nursing duties for Reg and Annie's bedridden mother so that Annie can go away for the weekend. Norman arrives unexpectedly to take Annie away, leading to Sarah's discovery that the two of them have been carrying on a long-distance affair since the previous Christmas. Sarah quickly talks Annie out of spending the weekend at a hotel with Norman, and instead, the four prepare to spend the weekend at the house. The next day, Norman focuses some of his charm on Sarah, leading her to panic and call Ruth to come down as well. Norman and Ruth have a sort of reconciliation on Sunday night, but Monday morning finds him still trying to thaw Sarah and rekindling the flame in the very willing Annie, who is frustrated at Tom's lack of perceptiveness. After the weekend guests have driven off, Tom finally proposes to Annie, but she tells him she wants to think it over before giving him an answer. Then Reg, Sarah, Ruth, and Norman return; Norman has managed to wreck both couples' cars. In the end, Norman is left sitting alone in the garden, out of favor with everyone—at least temporarily.

A television adaptation was made in 1977 with the following cast:

The Norman Conquests provides examples of the following: