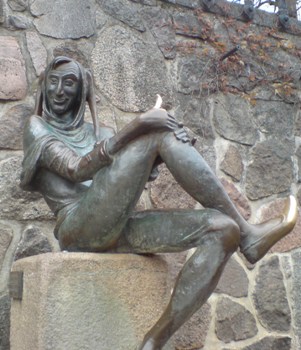 Till Eulenspiegel (low German: Dyl Ulenspegel or Till Ulenspiegel, Dutch: Tijl Uilenspiegel) is a folklore character originally from Low German oral tradition. He's a jester/fool who enjoys tricking people or driving them mad by taking things too literally. The first print version of his adventures, Ein kurtzweilig Lesen von Dyl Ulenspiegel, geboren uß dem Land zu Brunßwick ("An amusing reading of Till Eulenspiegel, born in the land of Brunswick"), appeared in Straßburg (now Strasbourg in France) ca. 1510 and became a best-seller by the standards of the age, being translated into Latin, French, Dutch, and Polish within the 16th century; under the name "Owlglass" he was also mentioned in Ben Jonson's play ''The Alchemist". Till Eulenspiegel appears to have been partly based on one "Tilo dictus Ulenspegel" (Tilo called Ulenspegel) who died in the town of Mölln in 1350. Some stories relate that for a time Till Eulenspiegel served king Kazimierz the Great of Poland.

In the 19th century the French-speaking Belgian author Charles De Coster adapted this folklore tales into the novel La légende et les aventures héroiques joyeuses et glorieuses d'Ulenspiegel et de Lamme Goedzak au pays des Flandres et ailleurs ("The legend and the heroic, joyful and glorious adventures of Ulenspiegel and Lamme Goedzak in the land of Flanders and elsewhere", 1867) which changed Ulenspiegel into a Flemish/Belgian Folk Hero who uses his intelligence and comedy to fight against the Spanish occupation during the 16th century. Ulenspiegel also got a new background story. He was born in the Flemish village Damme on the same day as Phillip II, the Spanish king who later would lead the Eighty Year's War against the Netherlands. Ulenspiegel's father is Claes, who is later burned at the stake by the Spanish occupiers, and his mother is named Soetkin. She later turns mad because of Claes' death. All these events motivate Ulenspiegel to fight against the Spanish oppressors. He is also given a girlfriend, Nele, and a gluttonous but jolly Sidekick named Lamme Goedzak. Ulenspiegel is seen as the incarnation of the spirit of Flanders, Lamme as that of the stomach of Flanders, and Nele as that of the heart of Flanders. The novel was adapted into a film with French actor Gérard Philippe playing the titular hero.

Comic strip artist Willy Vandersteen (of Suske en Wiske fame) also drew two well known comic books about the character. The first is more or less a retelling of De Coster's book with Uilenspiegel being a protestant freedom fighter taking on the Spanish occupation troops with trickery and subterfuge. The second sees him helping the Dutch by taking a ship to New Amsterdam and helping the natives fighting the corrupt Dutch governor.

Compare similar characters: Nasreddin from the Middle East, Herschel of Ostropol in Jewish folklore, Anansi the spider in Carribean folklore, Brother Rabbit in Afro-American folklore and even Alfred E. Neuman of MAD Magazine and Bugs Bunny seem to be made from the same mold.