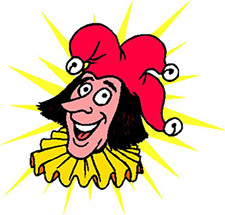 What's the first thing that comes to your mind when you hear the word jester?

Much like kings, castles, and knights, the jester hat seems to be synonymous with medieval times. However, contrary to popular belief, authentic jesters did not always wear this particular hat. For example, Will Sommers, Henry VIII's jester, wore a more poofy hat, like berets on each-other, with a cloth flower on top.

So, why is this hat so famous?

Some of this may be attributed to Stańczyk, one of the more famous jesters- or at least in Poland. Even then, his iconic hat wasn't a full example, being plain red instead of multicolored.

The hat itself represents a donkey—traditionally, the hat is worn with one flap forward, and the other two off to the side, representing the nose and ears, respectively. So the hat in a sense, represented how the jester would make an ass out of himself. Many medieval and renaissance versions of the hat also were made to resemble a rooster's comb, which lead to the hat being known as a coxcomb.

Further engraining itself in common knowledge of the general public is the popularity of Harley Quinn's character in the DC Universe, especially following Suicide Squad (2016).