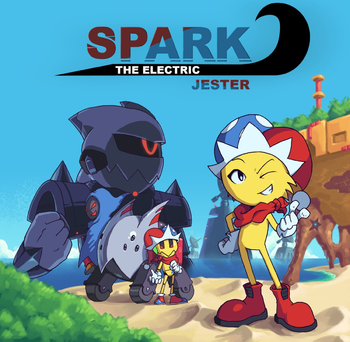 Spark the Electric Jester is a PC Action Game by Brazilian indie developer Felipe "LakeFeperd" Ribeiro Daneluz, previously known for his ambitious Sonic the Hedgehog fangame trilogy. It had a Kickstarter campaign that raised $9,162, mostly so Lake could formally hire the team of composers that had helped in his previous projects.
Advertisement:

The plot involves a jester named Spark who has lost his job to "Fark," a robot comedian designed to look just like him. Right after, robotkind happens to take steps into world domination. Spark soon finds his faker is among them and decides to travel the world and fight them off.

Spark features fast gameplay with momentum-based physics in the vein of Sonic games, much like Freedom Planet before it (both games have the same open-source community-made engine, Sonic Worlds, as a base), plus a series of weapons scattered around the levels that change Spark's attacks and attributes.

After a few delays, it was released on April 10th, 2017. Around a month later, the developer began teasing the production of a 3D sequel, Spark the Electric Jester 2, made on his own open-source HedgePhysics

engine for Unity. It is a remake of Fark's storyline from the original game, and was released on Steam on May 16, 2019.

Starting at the end of 2019, LakeFeperd had been showing off screenshots of an upcoming project he was working on. On September 7, 2020, the project was revealed to be Spark The Electric Jester 3.