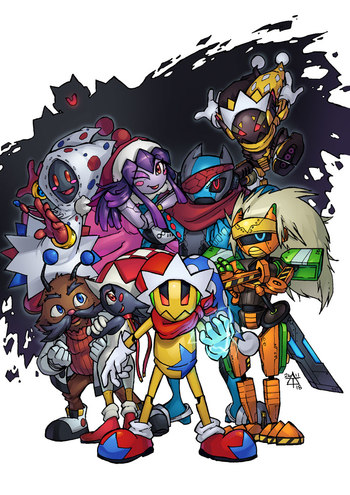 Spark The Electric Jester 2 (Formerly titled Fark the Electric Jester) is a May 2019 sequel to the 2017 Spark the Electric Jester PC action game by Feperd Games. It remakes the second storyline from the original, in which the robot jester known as "Fark" goes on a quest to save his creator and the world from an uprising of robots led by Freom, a machine-turned-virus who wants to enslave all life forms.
Advertisement:

Like the first, the game plays much like a Sonic game would with its fast pace and slope physics, but the combat mechanics draw inspiration from beat 'em ups such as Metal Gear Rising: Revengeance.

A September 2020 trailer revealed an Xbox One release for the game, as well as a follow-up, Spark The Electric Jester 3.

A demo with three stages is available here