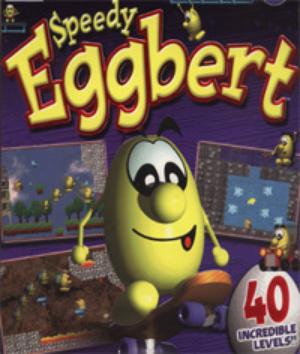 Speedy Eggbert, originally titled Speedy Blupi, is a 1998 PC game detailing the bizarre adventures of a 3D yellow egg creature named Blupi in a 2D land littered with Inexplicable Treasure Chests. Levels varied between enemy-dodging exploration and deductive platforming, primarily in the form of Block Puzzles. A key feature of the game was its dual jump buttons, and the clever use of the low and high jumps these offered.

Initially an indie game by EPSITEC and sequel to strategy game Planet Blupi, it was re-released by eGames, who added the 'Eggbert' title (and their own spyware

). The game was never a major hit, but garnered a small following due to the responsive controls, interesting level design and fully-featured Level Editor. Speedy Eggbert 2 (or Speedy Blupi II) was later released, adding a few minor additions to the feature set and a pile of new levels.

And yes, despite the game titles, his name remains Blupi throughout. Not to be confused with the first game of the Toki Tori series, even if they're both puzzle platformers about yellow egg-shaped guys.