Video Game / Sonic: After the Sequel 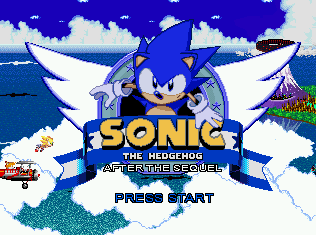 Sonic: After the Sequel is the 2013 sequel to Sonic: Before the Sequel, a fan game created by LakeFeperd using the Sonic Worlds engine.

The game is set between Sonic the Hedgehog 2 and Sonic 3 & Knuckles, and details how the Death Egg crashes on Angel Island. Unlike the first game, in which you would switch between Sonic and Tails each act, you can play as either Sonic or Tails. The game, like the first one, also features an original soundtrack by Falk

, and now with the addition of three new artists, DJ Max-E

The full game has been released, and can be downloaded here

. The continuation of the story, Sonic Chrono Adventure, has also been released.

On August 26, 2017, a DX version of the game was released with several physics tweaks and an added drop dash. It can be downloaded here

Surprisingly, not only is there an article