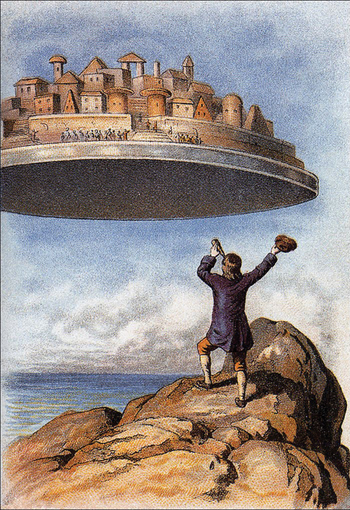 Laputa was a city considerably advanced for 1706.
"A vista into a world of wondrous ideas, signifying man's achievements.... A step into the future with predictions of constructive things to come. Tomorrow offers new frontiers in science, adventure and ideals: the atomic age, the challenge of outer space and the hope for a peaceful and unified world."
— Walt Disney dedicating the Trope Namer at Disneyland, July 17th, 1955
Advertisement:

An inexplicably technologically-advanced area in a place where it's far more advanced than its surroundings — for example, a far-flung Jetsons-esque metropolis in a game set during the modern day; or an advanced techno-dungeon in the middle of your Medieval European Fantasy. Either way, expect to run through streets and buildings high in the sky, and to dodge cars — of either the mundane or the flying variety.

Named after the section of several Disney Theme Parks dedicated to such things.

See also Schizo Tech, Zeerust and Decade Dissonance. May be the work of Fantasy Aliens.