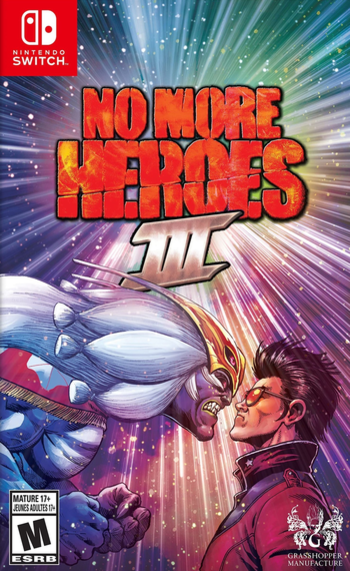 The Galaxy vs. The Hood
"But don't you worry: a hero descends. What, there are no heroes in this world? Oh, but there totally are! My name is Travis Touchdown. I'm the last hero around, here to save the world! I'm also just a passin' assassin."
— Travis Touchdown
Advertisement:

No More Heroes III is the third mainline installment of the No More Heroes series developed and published by Grasshopper Manufacture. It was released for the Nintendo Switch on August 27, 2021, with a version for PlayStation 5, PlayStation 4, Xbox Series X, Xbox One, and PC via Steam and the Microsoft Store set to be released on October 4, 2022 courtesy of XSEED Games.

Continuing two years after the events of Travis Strikes Again, our unlikely hero, Travis Touchdown, finds himself once again fighting his way to the #1 spot of the rankings. This time, however, his opponents are not simply rival assassins, but a mysterious, very powerful army of self-styled "superhero" aliens known as the "Galactic Superhero Corps", led by the megalomaniacal Galactic Conqueror Prince FU, his childhood friend and Utopina CEO Damon Ricotello (who wants revenge against Travis for the events of the last game), and his ten elite assassins who came to conquer the world. With these not-so-heroic extraterrestrials promising to be the most challenging and bizarre foes he's ever faced, along with fellow professional assassins Shinobu Jacobs and Bad Girl aiding him in the fight for the planet, Travis will have to pull out all stops to come out on top: with his trusty Beam Katana, the varied abilities of his Death Glove, and a new Full-Armor transformation, he is the only man capable of saving the Earth by ensuring that, in the end, there are no more heroes!

The game continues the full-scale directorial return for Japanese game developer Suda51, who took a hiatus from game directing after the original No More Heroes in order to focus on game production. Unlike Travis Strikes Again, which was a game made to pay tribute to the indie games that reignited his creative spark, as well as commemorate Grasshopper Manufacture's history, No More Heroes III is a product Suda has stated is made with the fans in mind who have been waiting for a proper continuation to Travis' story. As such the game features an all-star cast of new staff members and returning series veterans; this includes Nobutaka Ichiki and Ren Yamazaki (director of No More Heroes 2: Desperate Struggle and co-director of Travis Strikes Again respectively) both assuming the role of co-directors, as well as long-time series character designer Yusuke Kozaki returning to provide character designs. Newcomers to the crew include pop artist Masanori Ushiki; responsible for the character designs of the majority of the game's alien cast, and comic artist Skan Srisuwan; who designed much of the games' sci-fi architecture, including Travis' Powered Armor and several other bosses. On the music side, composing duties were handled by alternative metal drummer Nobuaki Kaneko; who has released music from the game under a new band he'd formed during production called "Red Orca". The game further features a host of guest contributions by artists such as Inio Asano, Darick Robertson (The Boys), Mari Shimazaki (Bayonetta), and composer Kazuhiro Abo from Travis Strikes Again.

Hey, gamers! Limit your gaming to ten hours per day! Any more, and you're seriously gonna die!

Example of:
Monster of the Week