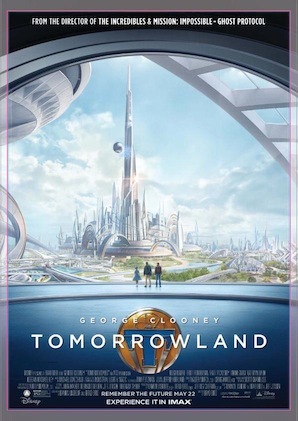 Remember Tomorrow?
Tomorrowland is a 2015 film produced by Walt Disney Pictures and directed by Brad Bird and produced by Damon Lindelof. The film stars George Clooney, Britt Robertson, and Hugh Laurie, and is inspired by the Tomorrowland area found at the Disney Theme Parks. The first teaser trailer was released on October 9, 2014.
Advertisement:

In 1889 at the Exposition Universelle in Paris, a group of visionaries put aside their differences to discuss how to make the future happen: Jules Verne, Gustave Eiffel, Nikola Tesla and Thomas Edison. They established a secret society, known as Plus Ultra, to figure out how and where to change the world. Eventually, Tesla's experiments uncovered an alternate dimension, which would become their living laboratory: A realm that would become known as Tomorrowland. The Tomorrowland we know in the parks was a cover story/orientation space created by later member Walt Disney, who was also giving lucky Plus Ultra inductees the opportunity to visit the real thing via a portal hidden beneath the 1964 New York World's Fair installation of It's a Small World.

In the present day, a young aspiring astrophysics student and daughter of a NASA scientist, Casey Newton (Britt Robinson), stumbles upon the secret when she is given a mysterious pin by a youth named Athena (Raffey Cassidy). She leads her to a jaded ex-boy genius named Frank Walker (George Clooney), who first journeyed to Tomorrowland at the World's Fair. Evading agents seeking to maintain a post-60s masquerade of Plus Ultra's activities, they set out to Tomorrowland to find just what's been keeping the world away from the future.

A prequel novel, Before Tomorrowland was released in April 2015. It tells the story of a mother and son who stumble into a conflict between Plus Ultra, Nazi scientists and an embittered cyborg around the 1939 New York World's Fair.

(Note: Tomorrowland is not connected with a Disney Junior animated series, Miles from Tomorrowland.)

The prequel novel Before Tomorrowland contains examples of:

"Find the ones who haven't given up. They're the future."