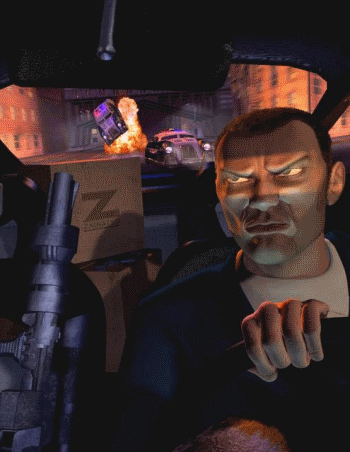 Don't worry, this could happen to anyone... Anywhere.
Respect is everything.
Advertisement:

In 1999, DMA Design released its first sequel to the original Grand Theft Auto. Set 20 Minutes into the Future in an unknown city known as "Anywhere City", each zone is controlled by numerous gangs and the powerful Zaibatsu Corporation. The player controls the hoodlum "Claude Speed" as he plays all sides to get the money to leave the city.

Grand Theft Auto 2 took the top-down free roaming gameplay of its predecessor and made several improvements: introducing the ability to save, the law enforcement hierarchy present in all future installments, and a "respect" system regarding other gangs and the missions they make available. The city is also huge, with a distinctive look and feel for each neighborhood (unlike the recycled textures of the previous game).

Mostly remembered for its live-action intro featuring Claude performing all sorts of tricks from the game, such as respraying his car and getting shot (presumably to no lasting effect). Most of the various gangs also make an appearance: the Rednecks, Yakuza, a captive Krishna, a group of Russian mobsters, and a Zaibatsu janitor-cum-hitman. The movie is set in New York (the original World Trade Center is visible), foreshadowing GTA III's Liberty City locale.

Rockstar has made the game available for free downloading alongside GTA 1. It can be downloaded here

And remember - Respect is every trope: