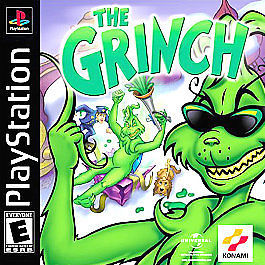 The Grinch is a 2000 video game based on the 2000 How the Grinch Stole Christmas! film, released for the PC, PlayStation, Sega Dreamcast, and the Game Boy Color. Despite being a tie-in to the movie, this game is noticeably different from its source material, featuring a larger emphasis on the extended world of the Grinch and a focus on general mischief-making mayhem rather than purely Christmas-oriented affairs.

The Grinch, who sits atop Mount Crumpit, is spying on the irksome Whos of Whoville with his telescope. Ever annoyed with their festivities, he plots to ruin the holidays with the help of his assortment of gadgets built from his many blueprints. However, in his rush to unload his plans, he accidentally causes all the boxes to tip over, and all the blueprints soon drift away in the wind and scatter out into Who Land. Not deterred by this faux pa, the mean one resolves to recollect his plans and cause all sorts of holiday havoc for the Whos.

The Grinch provides examples of: