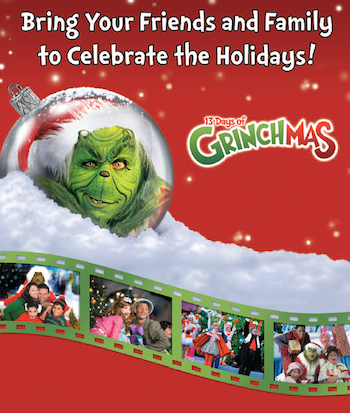 Grinchmas is a seasonal holiday event held at Universal's Islands of Adventure and Universal Studios Hollywood that runs from November to early January. The event is centered entirely around Dr. Seuss' How the Grinch Stole Christmas!, featuring several activities and entertainment acts inspired by the story. It was originally started up at both parks as a way of promoting the 2000 film adaptation. The event continued to be run at Islands of Adventure every year except for 2006, while at Universal Studios Hollywood the event didn't return until 2008, where it has since then continued to be run each year.

The event at Islands of Adventure has all of the Seuss Landing area being given a Whoville-themed overlay, with there being a Grinch meet-and-greet and the Wholiday Spectacular, a 30-minute show that retells the story of the Grinch.

Over at Universal Studios Hollywood, the event consists of three different entertainment acts in addition to numerous meet-and-greets with the Grinch and the Whos, the acts being a tree-lighting ceremony and two musical performances, The Wholiday Singers and Martha May and the Who-Dolls. The event also once featured a mini-performance on the Whoville set that's on the park's Studio Tour and a show called Story Time with Cindy-Lou, but both of these have since been discontinued.

Tropes in Grinchmas include: