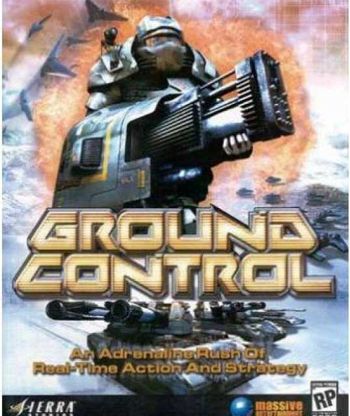 Ground Control was a groundbreaking tactical RTS in 2000; games like it are frequently referred to as RTT's, Real Time Tactical, for the fact that they eliminate any in-mission economy element and give you only the forces you started with to work through the mission. The shifts the focus of the gameplay to soundly employing what you have, rather than rushing more tanks. It was released as freeware to promote its sequel; get it here

The storyline involves two factions, the Crayven Corporation (aka. "Crays") and the Order of the New Dawn (aka. "Dawnies" or "The Order"), fighting for control of an extrasolar planet called Krig 7-B, in a vaguely Used Future setting where war has been outlawed on Earth since 2177, but conflicts continue to happen on distant human colonies such as Krig.

The two campaigns - the first one in which the player plays as Crayven, and the second one as the Order - are sequential with the second's story following the first. Although it initially appears as if Crayven just wants to take over the planet to establish a One Planet Under Copyright, the protagonists soon learn the true reason as to exactly why they are fighting - both factions are trying to seize lost alien phlebotinum (called Xenofacts) with which they plan to exert control over all the colonies and even Earth itself. The Xenofacts would, upon total activation, unleash an army of ancient alien war machines which the Precursors had built to defend themselves in some war millions of years ago, but never got a chance to use. Any mistake or misunderstood detail during the activation would result in the inevitable eradication of humanity.

Thanks to Major Sarah Parker (the player in campaign 1)'s campaign, Crayven nearly takes over the planet and forces the Order's cruiser to flee its orbit. But the Order does not give up and, with the help of guerrilla attacks conducted by Paladin Magnus and Deacon Jarred Stone (the player in campaign 2), is able to bring in a second cruiser and counter-attack, leading to a stalemate with neither side getting anywhere. The two sides declare a ceasefire, deciding to work on the Xenofacts together. This causes Major Parker and Deacon Stone to join together in order to sabotage their efforts and destroy the Xenofacts.

The Dark Conspiracy Expansion Pack followed later in 2000 and added a new faction, the Phoenix Mercenaries, former Crayven employees who decided to strike out on their own, working for the highest bidder. They have managed to come up with a sizable military using scrap metal given as payment. Major Parker is hired by the Order to eliminate a rogue faction of theirs called the Second Dawn with the help of the Mercenaries.

The second game, Ground Control 2 : Operation Exodus, was released in 2004, and takes place around two hundred years after the original. The corporations are gone, the Order of the New Dawn is probably gone as well. In their place is the Terran Empire (the bad guys), the Northern Star Alliance (the good guys), and the Viron Nomads (the freaky aliens). The plot revolves around the Terran Empire trying to take over the the Northern Star Alliance's home world Morningstar Prime, and the Virons being used as a slave race. The gameplay has been changed to be more RTS-like with reinforcements being a standard part of gameplay. This mechanic is later reused in the Spiritual Successor World in Conflict.