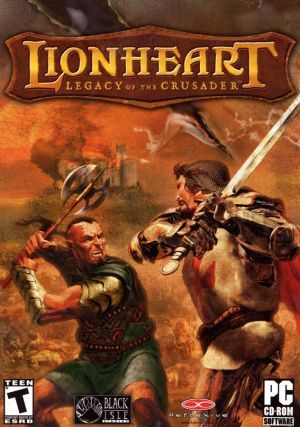 Lionheart: Legacy of the Crusader is an RPG developed by Reflexive Entertainment and published by Black Isle Studios (a division of Interplay Entertainment) in 2003.
Advertisement:

The game takes place in an Alternate Universe Renaissance Europe during the 12th Century - with magic. Conflict ensues between The Knights Templar, The Spanish Inquisition and the Wielders, who all disagree on the usage of magic and each other's control of the region. The player character, a newly-freed slave, sets out to ally with one of the factions and chart their own destiny, all against the looming backdrop of a massive war between Spain and England...

The game is notable for using the SPECIAL stat allocation system (from Fallout, another Interplay title) with a faction system, relatively open world and plenty of stuff to slash, club, spear, shoot, and zap.

Is now available on GOG.com here