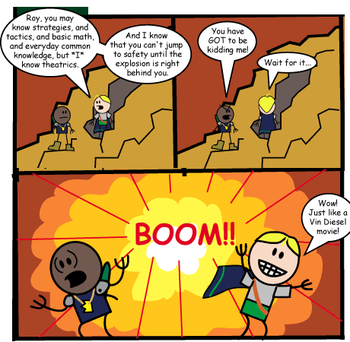 You're lucky no one got hurt!
Master Chief: How much time was left?
Cortana: You don't wanna know.
— Halo 2
Advertisement:

The video game answer to the Magic Countdown.

In timed gameplay sequences with a timer ticking down on-screen, the game will invariably act as if the player accomplished their goal just in the nick of time — even if they did so with plenty of time to spare.

For example, let's say you have just defeated the Load-Bearing Boss, and you now have ten minutes to escape from the building before it explodes. You, however, make it out with a good three minutes to spare. The second you leave, there's a cutscene of the building exploding, which is nonsensical because, well, according to the timer, it shouldn't have exploded for another three minutes.

Obviously, this is done because the developers want to show the building explode for dramatic effect, yet there isn't really any reason for your guys to stick around as the timer counts down. Furthermore, creating an alternate cutscene in which the building doesn't explode would require additional time and money, and might not be perceived by the developers as the most efficient use of resources if a large number of players aren't going to see it. Hence, Story Overwrite.

When this happens after a non-timed mission, it's a Take Your Time.

Not related at all to Alec Baldwin telling you that you should Always Be Closing! For the more general concept of the heroes winning by the slimmest of any margin, see Near-Villain Victory.