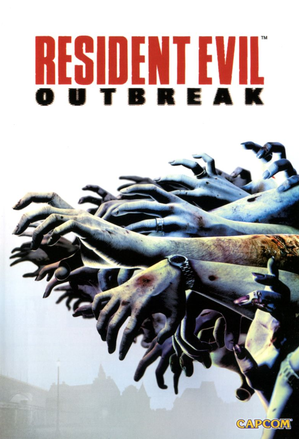 Resident Evil Outbreak, along with its sequel Outbreak File #2, are online entries in the Resident Evil series exclusively for the PlayStation 2, first released in 2003.

Both games take place during the Raccoon City viral outbreak covered in Resident Evil 2 and 3 centering on how an octet of normal citizens — Kevin Ryman, Mark Wilkins, Jim Chapman, David King, George Hamilton, Cindy Lennox, Alyssa Ashcroft, and Yoko Suzuki — react to the disaster, along with their efforts to escape the city safely. The biggest point of interest is that it's a classic style Resident Evil (aka tank controls, fixed camera angles and inventory management) but with online coop capabilities, meaning several people can work together to try to survive.

They really don't have a singular overarching story, per se, and instead are presented as a series of short scenarios which pit a group of characters in a location and task them with following its story to the conclusion and subsequent escape. These games' place in the canon is often the subject of dispute, due to the fact that they need to accommodate all eight characters, as well as contradictions present in these titles compared to the primary series.

Notable in that Capcom made a conscious decision not to implement voice chat capability, to try and keep the game "in character" (they didn't want a man's voice coming out of Yoko, for example) and also to ramp up the tension. It's arguable whether they succeeded in this venture or not, and a rather moot point anyway now that it's restricted to offline play only, which itself is restricted to single player with AI-controlled partners: Capcom shut down the American servers in December 2007 and the Japanese servers in June 2011.

The first Outbreak sold very well, mostly due to popularity of the Resident Evil brand. By the time File #2 came out, word had gotten out about the game's many bizarre design decisions, in addition to Resident Evil 4 stealing most of the game's spotlight. Despite being a large improvement in both stage designs and controls, including the addition of auto-aim and strafing, File #2 sold very poorly and seems to have ended the series.

In June 2011, the Outbreak brand was revived as a social network-based game known as Outbreak Survive. In it, players cooperate to solve puzzles and share items. It was also an Allegedly Free Game, free to play, but items could be purchased with real life funds.

Recently fans have reversed engineered the game and have created fan servers for Japanese versions of both Outbreak and File# 2. See here for more information http://www.obsrv.org/viewtopic.php?f=10&t=545

Black Command, an iOS and Android game that was released in 2018 has Rodriguez as a hired mercenary, part of a Resident Evil collaboration event that started from December 26, 2018 to January 10, 2019.

See also Left 4 Dead, which is arguably this game's Spiritual Successor. The Resistance mode introduced in Resident Evil 3 (Remake) also takes some cues from Outbreak in the form of average citizens having to escape from Umbrella's bio-weapons, albeit as an Asymmetric Multiplayer game with another player controlling an antagonist.