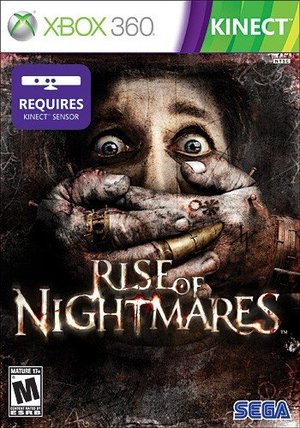 Basically, it's Donkey Kong as directed by Eli Roth, if he spent most of the production locked in his trailer playing Resident Evil 4.
— Zero Punctuation
Advertisement:

Rise of Nightmares is the first survival horror game and the first Mature rated game for the XBOX 360 Kinect.

While vacationing in Europe, specifically Romania, Josh and his lovely wife Kate themselves on an elevated train going through the stormy mountains. Their trip gets even bumpier after a discovery is made by Kate when she tries to tell Josh something important.

Since the game requires the Kinect, gameplay requires use of the entire body. Putting one foot forward moves Josh forward, putting one foot behind moves Josh backwards. Turning the shoulders turns Josh around. To fight, simply put the fists up in front of the body and put them down to exit combat mode. Kicking is also possible at anytime; good for putting distance between yourself and enemies. Items can be picked up by reaching out and grabbing them.

Also, there are nightmares, and they rise.