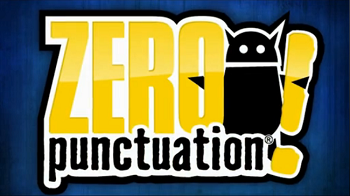 Some people say they have difficulty telling whether I recommend a game or not. I know, what morons!
"Releasing videos on YouTube is kind of like throwing messages in bottles out into a churning sea made up entirely of messages in bottles: the chance of your message getting noticed and someone being sent out to rescue you is punishingly slim. But every once in a blue moon, someone who owns a big boat made of money finds your message and agrees to let you ride on his big boat made of money if you keep making messages for him. Then the two of you go on adventures with a smart-mouthed talking dog and travel to the land of the gumdrop king and I've sort of forgotten where I was going with this."
— Yahtzee announces

The series that created the PC Master Race

Ben "Yahtzee" Croshaw, critic and amateur game developer, decided one day to conduct an experiment. He was faced with a demo of The Darkness he wished to review for his website and wanted to try something new, so he took Photoshop, Windows Movie Maker, a headset mic, and his sense of humour, and turned them into a YouTube video

to Fable: The Lost Chapters.

Less than a month later, he was hired by The Escapist

, an online magazine with a big boat made of money (see the page quote), to release one of these video reviews a week. And so began Zero Punctuation

. The combination of caustic humour (admittedly with occasional dashes of compassion), rapid-fire delivery, and visual gags made the show an instant success.

In. Order. To. Explain. His. Views. And. Opinions. On. The. Game. Of. The. Week. In. Greater. Detail. And. Bring. Up. Points. He. Could. Not. Turn. Into. Jokes. The column was dormant for while, with the written version having been discontinued since 2017, but was eventually resurrected in October 2021 in the form of a video series.

In February 2011, he also started a column called "Extra Consideration"

with Bob "Moviebob" Chipman and James Portnow of Extra Credits (though Portnow was replaced by Jim Sterling of The Jimquisition and Destructoid fame after he left the Escapist). The column sadly petered out by early September, but its entire run can still be found here.

However, in April 2013, Yahtzee and Jim started up again with the segment Jim & Yahtzee's Rhymedown Spectacular

where they recite slam poetry about the game topic at hand.

In 2015, The Escapist released an official casual game based on the series, Hatfall, which combines quick-fire gameplay with Yahtzee's usual brand of humor. It can be played here.

Previews of the next video were shown on X-Play for a brief period in 2008.

Since the beginning of 2017, Yahtzee has started streaming games after each ZP episode (usually the game he reviewed that day), and the Escapist YouTube channel also has several streams of him and his girlfriend playing games. Since 2019, he has teamed up with Jack Packard of RedLetterMedia fame for Let's Play videos and debates.

Don't confuse with the trope No Punctuation Period, although the show is named for the fact that he speaks quickly enough to embody that trope.

Tropes which Zero Punctuation provides an example of:

For a list of games reviewed by the series (that have pages on this wiki) see here:

Yahtzee explains how specializing in shotguns is useless in Alpha Protocol.

Yahtzee explains how specializing in shotguns is useless in Alpha Protocol.