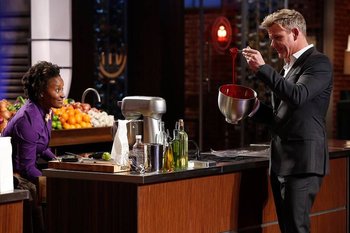 Gordon is always there to lend a hand... after he's done screaming about how much you suck, anyway.
To all their little weaknesses I open people's eyes;
And little plans to snub the self-sufficient I devise;
I love my fellow creatures— I do all the good I can—
Yet ev'rybody says I'm such a disagreeable man!
And I can't think why!
— King Gama of Princess Ida
Advertisement:

A person who believes, or pretends to believe that being bluntly negative in any evaluation of another person or object is for their own good, far better than using tact or encouragement. This can be a sincere thing or a thin excuse for being a Jerkass.

For example, a parent who tells their kid that their attempts at art are abysmal and worthless because they want the child to go into the family business, which the parent thinks will be better for them in the long run.

Or the coach who constantly insults and demeans their players in order to motivate them to do better.

Or the person who's just plain unpleasant to everyone because other people won't fix their flaws unless you point them out in detail, repeatedly.

If the compassionate critic's victim actually cares about their opinion and wants to earn their approval, this overlaps with "Well Done, Son!" Guy. Drill Sergeant Nasty adopts this technique during the early part of training, though the competent ones will vary the routine once their troops improve. This is also a favorite tactic of the Evil Matriarch and the Stealth Mentor. If the Compassionate Critic is actually paid to give their opinions on a field of endeavor, this overlaps Straw Critic. When the critic really does mean well, this is a form of Cruel to Be Kind. It may also make them a Jerk with a Heart of Gold.

A related Internet Persona is the "concern troll", who assures the group a forum is based around that he has their best interests at heart, and "you feminists would get a lot more done if you weren't always nagging about wanting equal rights" or "by being fans of shows that haven't been commercially released in your area, you anime fans are destroying the anime importation industry."

In Reality TV, the compassionate critic will always offer unsolicited advice to the other contestants; act as a talebearer, keeping any minor disagreements stirred up to a high simmer; and, in shows where someone is voted out, will often spearhead at least one effort to vote out another player "for their own good".

Compare and contrast the Caustic Critic, who also accentuates the negative, but isn't as concerned with the "tough love" angle.

Compare/Contrast Constructive Criticism. If anyone else tries to criticize the critic's target, may lead to Hypocritical Heartwarming.