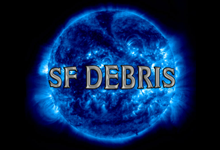 "Picture?" There is no picture. Cameras steal your soul!
"Don't look at me though, I'm just a viewer with an opinion."
— SF Debris' Opinionated (Voyager / Enterprise / TNG / Deep Space Nine) Guide
Advertisement:

once known as Sci-Fi Debris, is a website run by Chuck Sonnenburg, a long-time member of various Star Trek and Star Wars online fan communities as well as a big fan of Mystery Science Theater 3000. What he and the website are mostly known for these days are his "Opinionated Star Trek Episode Guides", snarky-but-loving reviews of the Trek franchise.

Since 2008, he's taken his reviews onto a video format on YouTube

, Blip (now defunct), Screenwave, Vidme (now also defunct), and Vimeo, growing in popularity. His style, a mixture of serious analysis peppered with deadpan humour played over clips from the show, has begun to catch on with other reviewers (including Linkara, who borrowed one of his ideas, and eventually led to Linkara's own series, History of Power Rangers). His site also features a few essays (including a history of how Spider-Man has declined in quality) and his (two trilogy, 250 chapter) crossover Fan Fiction, The Unity Saga. And now he's branched out some more with the Star Wars Gag Sub "Astromech Spy" and three serious documentaries about the Making and Rise of Star Wars as well as its creator, George Lucas, with the 100-minute The Hero's Journey, the nearly-three-hour The Shadow's Journey, and the slightly over three hours The Hermit's Journey

Often compared (and paired) with Confused Matthew, to the point where CM had been kind enough to give him a dedicated sub-forum; particularly useful as the two have a similar fanbase anyway, though now he (SFDebris) has his own forum

. He also made a cameo in the 200th episode of Atop The Fourth Wall.

On May 12, 2011, all of his Star Trek reviews were removed from Youtube

, as a pre-emptive measure when CBS (which has been cracking down severely on other Star Trek fan channels as well) filed a claim against his "Trials and Tribble-ations" review. As The BBC has already done the same with his Red Dwarf reviews, under the Youtube "three strikes" policy, he now has only one strike remaining.

He announced on July 29th 2014 that he'd been accepted to Channel Awesome via one of the site's talent searches. He officially started appearing on the site on October 11th. On March 24th 2018 he announced his departure from Channel Awesome.

Following Blip's closure on August 20th 2015, the show went on a brief hiatus. Chuck returned on September 1st and used Screenwave as his host, but in early May 2017, he had to switch over to Vidme

like everyone else who used Screenwave's player on their sites. Vidme going under relatively shortly thereafter necessitated yet another move to Vimeo, only for the later to eventually start flagging all his Star Trek content forcing him to migrate those to Dailymotion, which in January 2021, also suddenly removed his videos.