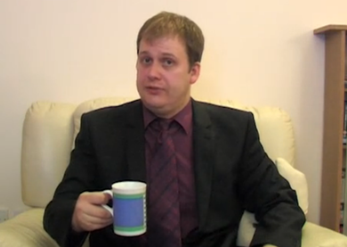 Mike Jeavons, or MikeJ, is a British person and was a reviewer on Channel Awesome until March 2018. His shows include Shameful Sequels, which looks at inferior movie sequels and Hang on a Second, which is essentially a show about Fridge Logic, Fridge Brilliance, and Fridge Horror. More recently he has begun a show looking at the output of The Asylum in an uncharacteristically positive So Bad, It's Good fashion, called Asylum Seeker and a sort of riff show regarding infomercials testing and usually mocking the product in question called "Infom€rcia£i$m". He can be found on YouTube

On the side, he runs a movie analysis channel known as Film Thought

Also known for his English to American video.