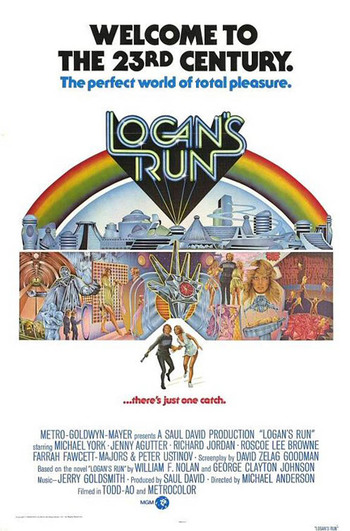 Run, Runner!
"Sometime in the 23rd century... the survivors of war, overpopulation and pollution are living in a great domed city, sealed away from the forgotten world outside. Here, in an ecologically balanced world, mankind lives only for pleasure, freed by the servo-mechanisms which provide everything. There's just one catch: Life must end at thirty unless reborn in the fiery ritual of Carrousel."
Advertisement:

A 1976 Science Fiction film, directed by Michael Anderson and based on the novel of the same name by William F. Nolan and George Clayton Johnson. The cast includes Michael York, Jenny Agutter, Richard Jordan, Farrah Fawcett, and Peter Ustinov.

The film depicts a future society in which everyone is young and healthy, no-one needs to work, and people look forward to the chance for "renewal" (presumably some sort of rebirth or reincarnation) by undergoing the rite of "Carrousel" at the age of 30, a privilege given to those who have obeyed the rules faithfully. However, there is a darker secret to this apparent utopia: no one has ever survived Carrousel. Resource management and Population Control are simply maintained by mandating the death of everyone who reaches the age of 30.

Logan 5 (York) is a 26-year-old Sandman whose job it is to hunt down and kill "Runners" — those who reach 30 but don't report for Carrousel. When he learns that the Runners are trying to reach a place called Sanctuary outside the domed city, he is assigned to find this place and destroy it. In order to do this, he will masquerade as a Runner. His life-clock is adjusted accordingly — with no assurance that he'll get his 4 lost years back — and he finds himself pursued by his fellow Sandmen as he searches for the truth behind Sanctuary.

While the movie was successful for its time, and is often mentioned in the same breath as other classic, dystopian, late-60's to pre-Star Wars sci-fi films like Planet of the Apes (1968), Soylent Green, and Silent Running, it bears very little resemblance to its source material. A short-lived TV adaptation followed a year later.

Multiple attempts to remake the film (and to adapt it more closely to the novel) from notable directors like Bryan Singer and Nicolas Winding Refn, have all been unsuccessful. In 2013, Warner Bros. hired BioShock lead designer Ken Levine

to write the script for yet another try at a remake.