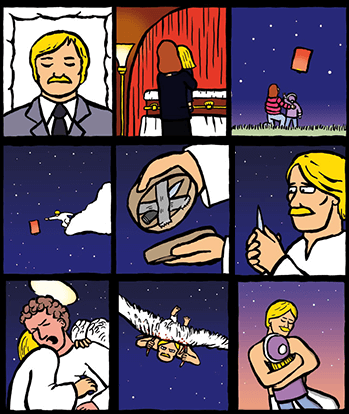 I can discover within me no power of perception which is not glutted with its proper pleasure, yet I do not feel myself delighted. Man has surely some latent sense for which this place affords no gratification, or he has some desires distinct from sense which must be satisfied before he can be happy.
— Prince Rasselas: The History of Rasselas, Prince of Abissinia
Advertisement:

In certain stories, there are situations where a group or an individual decides to leave what is essentially a utopia or a paradise for a variety of reasons. The setting that the character decides to leave is usually depicted as a form of utopia similar to views or places like Shangri La, Nirvana, Shambhala, or Heaven that are lacking in the usually cumbersome qualities that relate to real-life issues of modern society or living.

What you're probably asking yourself is why would someone decide to leave such a utopian setting? Maybe it's for a strong love of someone who is not in the same setting. Maybe the ones who are leaving feel they have no place there. Maybe there is a dark secret that keeps the setting so idyllic that the ones leaving just cannot tolerate. Or maybe the setting is so sublime that it's just boring and lacks the thrills of cumbersome living. Who knows?

Regardless of the reasons, this trope involves the circumstance where the ones who are leaving can't bear to stay in the place any longer and decide to just pack up and leave.

In comparison and contrast to a Fallen Angel, the ones who leave paradise are not kicked out by some higher authority but leave of their own volition. However, if the one who becomes a Fallen Angel does so by choice then this trope still applies. Contrast Escaped from Hell.

This trope can overlap with Refusing Paradise, but the ones involved must have experienced the paradisaical setting before choosing to defect as opposed to simply refusing an offered choice. The trope can overlap with Defector from Decadence if the setting in question holds norms and views that are opposed/outright rejected by the defector.

Warning. As a possible Death Trope, all Spoilers will be unmarked ahead.