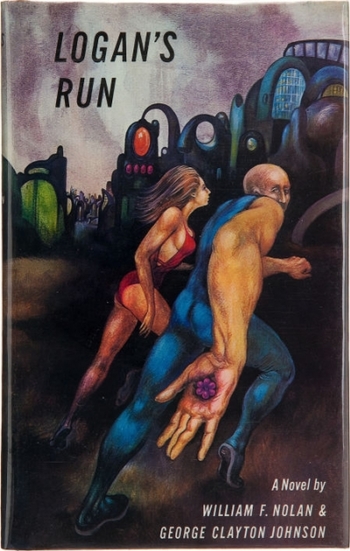 Before the movie, Logan's Run was a 1967 novel by William F. Nolan and George Clayton Johnson.

At the close of the 20th Century, the "Little Wars" broke out, resulting in a worldwide ban on all adults. Before you reached your 21st birthday, you were required to turn yourself in for "Deep Sleep" in which a pleasure-inducing poison gas sang you gently to your grave. If you ran away from this responsibility, a "life clock" embedded in your right palm would turn black and alert the local Deep Sleep Men (euphemistically called "Sandmen") to hunt you down and kill you — by shooting you with the Homer, the most gruesome, vicious, pain-inducing weapon ever devised by man.

Now, in the year 2116, Logan 3 is one of these Deep Sleep Men. When he chases down a Runner named Doyle 10, the man screams the mysterious word "Sanctuary!" right before he dies. Logan has heard rumors of the mysterious Ballard, the man who's allegedly led a "double lifetime" and runs the Sanctuary Line to help Runners escape their mandated destiny — possibly even by leaving Earth itself. When Logan's own lifeclock begins blinking red-black-red-black, indicating that he's on his Last Day before he has to turn himself in for Deep Sleep, he resolves to spend his final 24 hours hunting down Ballard and wiping out the Sanctuary Line once and for all. Meanwhile, a mysterious D.S. Man names Francis 7 watches Logan from the shadows.

Adventures on a post-apocalyptic Earth ensue.

William F. Nolan went on to write two sequel novels, titled Logan's World and Logan's Search. The novel caught the attention of Metro-Goldwyn-Mayer, who eventually turned it into a movie that while successful for its time, had few things common with its source material.

Then there's ebook novella Logan's Return in 2001, more than 20 years after the last book.