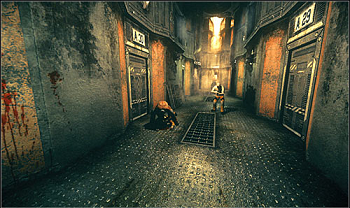 "The vilest deeds like poison weeds
Bloom well in prison air.
It is only what is good in man
That wastes and withers there.
Pale Anguish keeps the heavy gate
And the Warder in Despair."
— Oscar Wilde
Advertisement:

Plenty of prisons simply content themselves with confining people, but some go the extra mile and actually try to break them. This sort of prison is an absolute hellhole — between the lack of food and proper clothing, the absence of light or sanitation, the sadistic guards, and the violently insane fellow prisoners, they hardly need the nasty-looking torture equipment they probably have scattered around. Sometimes, they won't bother with things like individual cells — prisoners will just be lowered into a big pit and left to fight each other for whatever scraps are thrown down. Expect the inmates to be treated like animals, and expect most of them to act like animals as well. Indeed, being thrown to the prisoners might be used as a punishment just like being thrown to the lions, and jailers in such places occasionally suffer Karmic Death that way too.

Alternatively, especially in the future settings, the prison might not be a barbaric pit where only the strongest survive and where the guards turn a blind eye to the criminal control. Instead, it will be a Dystopian Panopticon where every action is monitored, any step out of line is equated with an attempt to escape and punished accordingly, and there is one, if not several, Mad Scientist(s) who regard the prisoners as nothing more than guinea pigs for their immoral experiments. Of course, the worst of prisons might well mix and match the elements outlined above, resulting in something like a Nazi concentration camp.

Story-wise, this sort of prison will often get heroes thrown into it, so that the hero can demonstrate their inherent hero-ness by refusing to be defeated by the prison, often because they were either framed for the crime that got them sent there or because they are an enemy of the evil dictatorship that runs it. It may also serve to toughen them up for the next part of the plot (since pretty much any story with a prison as a setting involves a Great Escape as the plot). Other times, it will just serve as a Fate Worse than Death which the hero must fight to avoid.

Those that went through it often decide that they are Never Going Back to Prison.

A prison like this will often also be The Alcatraz or a Tailor-Made Prison, but those are defined by the difficulty of escape rather than the conditions — some of those prisons can actually be quite nice. If a prison is this cruel to child prisoners, see Juvenile Hell. Related to Bedlam House.