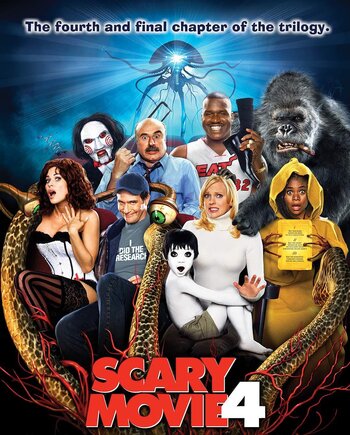 And it didn't stop there.
"The fifth book in the increasingly inaccurately-named Hitchhiker's Trilogy."
— Mostly Harmless
Advertisement:

The strange tendency of trilogies to expand and see more and more works added to The 'Verse. This is mainly found in books, but has also happened frequently with movies, and can occur with any other type of media as well.

Science Fiction author Orson Scott Card has suggested that this is the result of Executive Meddling; rather than allow an author to just write the books they want to write, publishers pressure them into producing sequel after sequel in order to take advantage of the preexisting fanbase and milk a Cash-Cow Franchise bone-dry.

Two-Part Trilogy is somewhat related, typically the result of a one-part story expanding into a trilogy. Contrast Divided for Publication, which is when a work is split into more parts than the author originally envisioned, due to excessive length, and Divided for Adaptation, which is when a work, particularly if it's the final book in the series, is split into two or more parts in an adaptation.