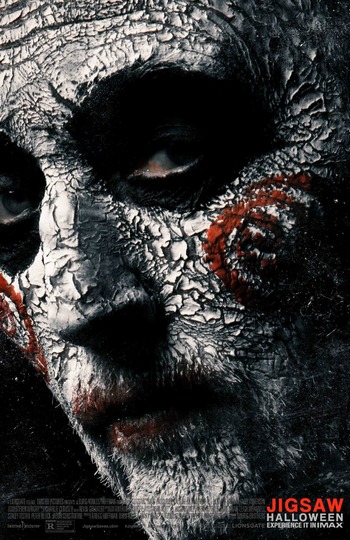 "The truth will set you free."
"Now, the game's simple. Best ones are. You want mercy? Play by the rules."
— Jigsaw
Advertisement:

Jigsaw is the eighth film in the Saw horror film series, and its first installment after a seven-year hiatus that followed Saw 3D (which originally served as the series' finale). It was directed by The Spierig Brothers and written by Josh Stolberg and Peter Goldfinger. The film was released on October 27, 2017, keeping with the franchise tradition of releasing a new film just before Halloween.

Police have no answers when the bodies of murder victims start dropping into their laps, each one having met with a uniquely gruesome demise. As the investigation proceeds, evidence points to the most unlikely perpetrator — "The Jigsaw Killer", John Kramer. But he cannot be responsible for these murders... because he has been dead for over a decade.

If Kramer isn't responsible, then who is the copycat behind these new "games" — and can the police stop them before they kill again?