WARNING: All spoilers from previous films in the Saw franchise are unmarked here. Read on or go back—make your choice. 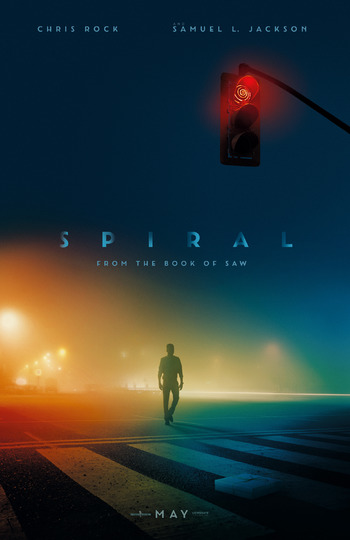 Discover a new chapter.
"Hello, Detective Banks. Do you know where your officers are?"
— Spiral
Advertisement:

Spiral (fully titled as Spiral: From the Book of Saw) is the ninth film in the Saw horror film series. Darren Lynn Bousman (who previously directed Saw II, III and IV) returned to the franchise as director, with Josh Stolberg and Peter Goldfinger from the previous entry returning as writers. The film stars Chris Rock, Samuel L. Jackson, Max Minghella, and Marisol Nichols.

Spiral tells the story of detective Zeke Banks (Rock) and his rookie partner William Schenk (Minghella) as they begin investigating a string of grisly murders committed by someone who's specifically targeting police officers.

The deeper the detectives get into the mystery of who's murdering their colleagues, the clearer it becomes that the perpetrator has styled themselves after the original Jigsaw Killer, meaning that their horrific actions are all likely motivated out of a sick desire to enact some sort of justice.

In defiance of Lionsgate's past tradition of releasing Saw films just before Halloween, Spiral was originally scheduled for release on May 15, 2020, but was delayed due to the COVID-19 Pandemic. The film was eventually released on May 14, 2021. Before the film's release, a podcast titled Seeing Saw: The Official Spiral Podcast was aired to promote it, in which critics Catherine Bray, Anna Bogutskaya and Charlie Shackleton discussed previous films in the series, with special appearances from Bousman and series producers Leigh Whannell, Mark Burg and Oren Koules. A final episode of the podcast for the film itself was aired upon release.

Not to be confused with the horror manga Uzumaki (Eng.: Spiral), the other manga actually called Spiral, the 2007 Joel David Moore film or the Canadian horror film

that premiered on Shudder in 2020.

"Whoever did this... they're pulling all the strings."

Alternative Title(s): Spiral 2020, Spiral From The Book Of Saw