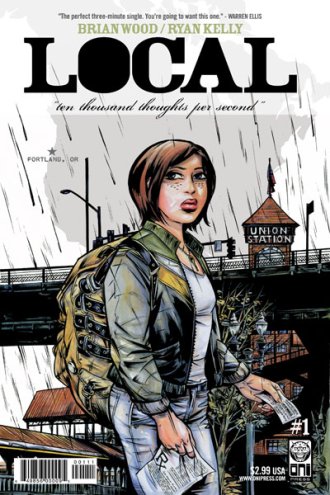 "Where am I from? All over, really. No place exciting."
— Megan McKeenan, "The Last Lonely Days at the Oxford Theatre"

A 12-part comic series published by Oni Press starting in 2005 and ending in 2008, Local covered twelve years in the life of Megan McKeenan. Each issue was a stand-alone Slice of Life story, sometimes with Megan as the main character, sometimes with her only in the background. Written by Brian Wood (DMZ, Northlanders) and beautifully drawn by Ryan Kelly (Giant Robot Warriors), each issue took place in a different city in North America and featured Megan at a different place in her life.

The twelve parts were:

Each issue also has an amount of back matter, notes from both Wood and Kelly, including their own soundtracks to each issue. It is a definite must read.